This is a Feather Farming build for any Profession in Normal Mode. The Sensali can drop both feathers and bones. They also drop Feathered Crests which can be salvaged into 2-3 feathers each.

NOTE: It is highly recommended to bring one IMS and one extra survivability skill especially if new to feather-farming or aggroing more than one mob.

For any of these options, drop Restoration Magic to 10

Mesmer: +8 in Domination or Illusion: 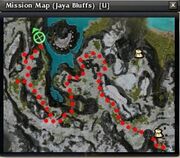 This is the route for the farm.