A build used for farming Cultist Rajazan (in Normal Mode) for the elusive Rajazan's Fervor.

The first couple of optional slots are dedicated to mobility:

The rest of the slots can even be left empty, it shouldn't matter for most classes. That being said, there are some tools that can make the run smoother/faster (and squishies may want a bit more sustain): 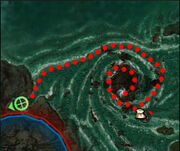 The Spoils of War