This two team setup is for farming plant fibers in the Holdings of Chokhin. You gain about 800 to 1000 Sunspear Points and about 100 Plant Fibers in 7 to 10 minutes.

The Finisher is optional, but it speeds up the run a lot. It can be played using Mo/N or N/Mo.

For tanks that can't cast Spell Breaker on themselves, you will need an additional Monk with spell breaker. This person can replace the finisher. 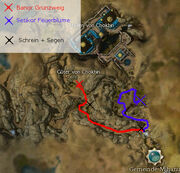 Both routes in the Holdings of Chokhin