The Hundred Blades Warrior uses the powerful AoE combo Hundred Blades and Whirlwind Attack to farm Smite Crawlers in the Underworld. Sympathetic Visage prevents Grasping Darknesses from interrupting you and Smite Crawlers from using Reversal of Fortune and Shield of Judgment. Physical Resistance allows you to tank damage effectively. The run can be as fast as 5-6 minutes with experience. It is also possible to use heroes to clear the labyrinth's chamber, in that case the whole run will be slower but safer, and you'll also be able to kill the Skeletons of Dhuum.

If using heroes to clear the chamber :

The Chamber (only if playing without heroes)

The Run (only if playing without heroes)

Skeletons of Dhuum (only if using the variant with heroes)

A map that shows the patrol routes of Coldfire Nights and Skeletons of Dhuum: 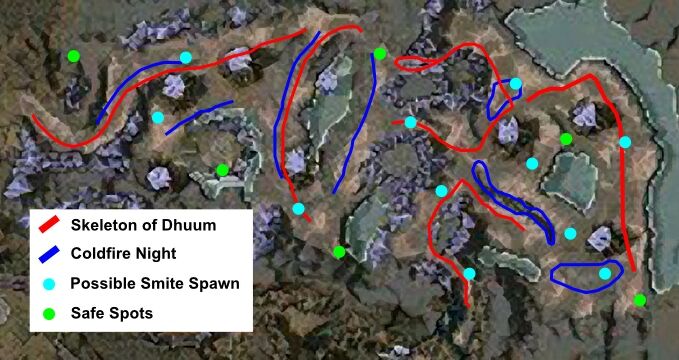