Back to page
View source

Looks kinda nice. I'd mainbar Death's Charge and add optional for an interrupt other than exhausting (CoF, Distracting, etc). But it's melee hero so it's gonna get trashed. Miharo 23:36, 1 March 2012 (UTC)

I thought heroes were terrible with dagger chains

good for casters who don't care about balling. i suggest making this a team build instead, with splinter and SoH heroes. that's where most of dagger power comes from. ♟Fianchetto

Wonder how this would compare to a VoS derv hero though. They seems to have more utility and arguably better damage.

More barbs/SoH/orders triggers too. I'll probably consider this with the N/A AP build. Miharo 02:43, 2 March 2012 (UTC)
Tested both. VoS derv has slightly less single-target damage, but has more armour. The AoE is negligible because of Mark of Pain and daggers triggering faster than scythe attack speed. What utility do dervs have? Cracked Armour is all I can think of. They can also be ench stripped, which sin heroes can't. By the way, sin AI won't use Exhausting Assault. I imagine it would fail if they tried to use it in a combat situation because requires a lead. Soi Sticker 02:58, 2 March 2012 (UTC)

It's stance removal, free damage, and doesn't fuck with the chain. Puts something useful in the optional slots.--Relyk 04:59, 2 March 2012 (UTC)

Why don't use Twisting Fang instead Malicious Strike for a good Deep Wond spamm? KurtyAchile

Why not? Malicious doesn't have to be mainbar, so you have two free slots for utility and the rest of the skills are identical to the mainbar of the human bar, minus the PvE skills. The fact that it's not meta does not matter as it's the last tag on the list and meta represents the primary category. Soi Sticker 09:43, 2 March 2012 (UTC)

Merging builds like this (and the AP mesmeR) blurs the line between builds and guides. Huge lists of variants, optionals and different tactics are added which ends up making an extremely simple page complicated and as I've said repeatedly causes a severe lack of focus. With Love~, ♣ RąʂKɭɘş 10:16, 2 March 2012 (UTC)

I agree with separate pages. Merging hero and player builds generally make them so big and clustered. Different usage and optionals and even elites. Miharo 11:17, 2 March 2012 (UTC)

By the way, are all allowed to delete merge tag or there's some1 who is specially for this? Maciej "oarwhr why is tihs a signet? stancez donnot cost nrgay for 38 secunds" 17:02, 2 March 2012 (UTC)

Shit like "Watch Yourself!" and a lit of /P shouts work for these heroes. Vincent Evan [Air Henchman]

Except vs the Master of Healing - where it rupted Reversal of Fortune then Guardian :) (yeah not worth taking) Chieftain Alex 00:58, 4 March 2012 (UTC)

Oshit. So they manage to use JS+EA in the time the enemy casts RoF? Soi Sticker 01:09, 4 March 2012 (UTC)
As I suspected... Random as hell and will only use if just cast JS and not yet used FF (unlikely since update) and if they're casting a spell. But meh, but there isn't much else going for the second utility slot that won't fuck it's energy. Soi Sticker 11:21, 4 March 2012 (UTC)

You can post the W/R/D variants if you want

Why? 3 Assassin Heroes(2 Easy to get) or you want 5 WoTA's in your team:P? Sjan 12:57, 3 March 2012 (UTC)
Should replace endure with something more useful, derv can run any avatar setup since zealous renewal + zealous dags gives plenty of energy to spam, ranger should be abusing expert's dexterity RaO is high energy cost and who cares about pet attack speed, they're extra meat shields.@Sjan, each profession has benefits. Warriors have high AL and armor penetration, dervishes have high hp,snares,cracked armor, and rangers have superior cost reduction + pets which is like throwing two tanks into your team. With Love~, ♣ RąʂKɭɘş 13:00, 3 March 2012 (UTC)

not a bad idea zealous renewal in the D, but you can't take avatar (no physical damage = no mop, no order :/)but i don't find a good elite, maybe

5¼8 , and yes, variants is usefull if you don't have Miku (and D or W have 100AL with good insignia), remplace endure, why not but by what? KurtyAchile

With more damage. Protector's Strike would be nice.

i just noticed that 95% of optionals on pvx are followed by really obvious descriptions. i also found Death's Charge usually unneeded. if you stand out of aggro and flag the hero into it, things will ball together by themselves. of course, if that's too much trouble...♟Fianchetto

Pages look less empty with descriptions. Plus, it doesn't hurt to have them. Vincent Evan [Air Henchman]

You could not take Locust Fury because it's a god fucking awful skill. They need to buff it so you proc AoE damage on double-strikes or something because as is it's garbage. With Love~, ♣ RąʂKɭɘş 01:02, 4 March 2012 (UTC)

Do you have an ST or ER hero on the team? Also, I'd consider Critical Defences if no block is consistent enough. Soi Sticker 06:19, 4 March 2012 (UTC)

actually it's better if he keeps their full attention. it's a bit harder to tank without pve-only skills (e.g., "IAU!") but ST and enough heals should have done the job. if it's still not working, you could try putting SoA on a smiter or even Vow of Piety (which mimics "IAU!") on Anton. that might be overkill though. ♟Fianchetto

Dagger Hero Variants and their dps

I'm Supernick530. I spent time testing the following A, W/A, D/A, and R/A dagger hero builds on the MoD over 180 seconds:

All heroes used Zealous Daggers of Fortitude, except for the D/A who used Vamp Daggers of Enchanting - Zealous Vow keeps energy at 100%. I tested all four heroes with Vamp modded daggers, and the D/A is the only one that didn't lose significant DPS due to energy. The warrior's and dervish's dps are so low that I wouldn't recommend bringing them in any normal circumstance. --Supernick530 01:12, 6 March 2012 (UTC)

The Sin and the R/A have such high dps. The sin has high dagger mastery, high crits, and IAS. The R/A, a pet, and IAS. What bothers me is that the Derv's DPS is so low and yet he has such good energy management. Isn't there something that can be done to increase his damage?. --Supernick530 15:24, 6 March 2012 (UTC)

Well, basically, the sin has the highest dps for good reasons. Higher attribute spec, enormous increase in Crit rate and a higher chance of doublestriking. The dervish, well, it must for its IAS to start, and it's elite is only there for energy, obvious of course. The Dervish just deals more damage with a scythe, even with one target. -- Shadow Talk with me :D 15:45, 6 March 2012 (UTC)
Try expert's Dexterity on the ranger. RaO is stupid. With Love~, ♣ RąʂKɭɘş 16:02, 6 March 2012 (UTC)

eh...strictly for DPS, you should take a pet. parade a panda around with RaO or Enraged Lunge. for the derv, try dropping the defense skills in favour of stuff like Whirling Charge/Eremite's/Reap Impurities. scythes are much better though. ♟Fianchetto

so, basically, only take warrior if you want the extra defense they offer, never take dervish, and take ranger if the pet will be be advantageous (IE need more physical triggers for barbs/MoP, or need another frontliner), and not be disadvantageous (pet dying). 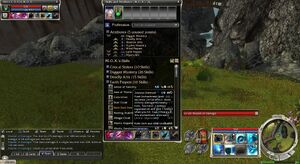 no strength of honor though? If we are gonna do this right we have to test optimal filled out bars for each profession, then I'de say list them in variants section. 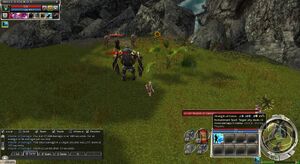 and then trash them because they should all be together in a guide, right. ♟Fianchetto

I find EDA appealing, not sure about energy but heroes don't spam attacks fast enough to afford excessive management with Zealous Vow. I like sin primary best as you can bring utility and afford the same amount of damage given from other primaries. R/A and D/A seem like viable builds individually.--Relyk 15:39, 8 March 2012 (UTC)

it was sort of strange that dervy didn't spam the chain as fluidly as the update made it sound, even at full energy. and dervy always paused when putting up a FE/stance. ♟Fianchetto

AI checks if other skills are available for use, they prioritize using skills available over attack chain. The coding seems to be incongruous and causes the AI to pause to use other skills. It actually puts you at a disadvantage to bring skills that don't add more to damage than the delay they cause.--Relyk 18:13, 8 March 2012 (UTC)

MoD results are skewed by only testing against 60 AL. I tried A, R/A (no pet), and W/A versions against killing the 4 armors on Isle of the nameless (60, 80, 100, 60) with SoH and got 31-32s for A, 31-32s for R/A, and 32-34s for W/A. To me this shows that the A version is doing better against MoD due to crit damage, the R/A version has the best IAS even including double strikes (can also see that from Relyk's numbers), and the W/A version would be equally viable in areas with mostly higher than 60 AL (usually the case). Expert's Dexterity is by far the best IAS for heroes since the AI will maintain it all the time without ever thinking about it. Tasty 03:24, 24 April 2012 (UTC)

Removing all the odd optionals

I approve. The zero activation ones weren't even all that good because they cause heroes to pause other skill use (even though they don't have to) so stuff like Watch Yourself actually impacted DPS. Pet can actually be a net increase in DPS but leads to a kinda bad att distribution that results in the hero bottoming out on energy more often. -Toraen (talk) 23:29, 31 July 2018 (UTC)

The dps increase is only against single targets, is almost entirely armor dependant and turns one AI controlled frontliner into two, of which the pet is even more likely to stand around doing nothing than the assassin himself. Unless you fight Varesh, Shiro etc. a pet on heroes just isn't that great. Anyway, it's probably better to have just these few optionals. I'd like to add signet of malice, but I can't right now test whether heroes will use it properly.--Krschkr (talk) 01:04, 1 August 2018 (UTC)

They just sit there

I put Jagged-Fox Fangs-Death Blossom with Crit. Eye & WotA on 2 Sin heroes and they often just stood there, not spamming their attacks half as fast as a player would. It could be because the necessary triggers did not occur for them to use their skills (for example, Fox Fangs does unblockable damage, so maybe a hero would only use that if a foe had blocking skills, or the engine would have to go through a long list of priorities before it decides to make the hero just use the skill for damage...; or a hero might not use Jagged on a foe that is already bleeding; or might not use Death Blossom if there are no adjacent foes). But for now sins should be benched imo.--Saxazaxx (talk) 00:15, 7 August 2018 (UTC)

They might work better if they use unconditional damage attacks to fuel Death Blossom.--Saxazaxx (talk) 00:17, 7 August 2018 (UTC)

General issue with dagger attacks. The AI loves to do at least one auto attack between each attack skill. --Krschkr (talk) 01:28, 7 August 2018 (UTC)