Zaishen Trapping is a common method of quickly farming Balthazar Faction. It makes use of the Battle Isles mission Zaishen Elite or, to a lesser extent, Zaishen Challenge, and powerful Ranger Traps, along with the predictability of Zaishen AI.

Zaishen Elite trapping can be broken down into the following steps:

Generally, a trapper team consists of 4 Trapping Rangers, with the occasional caster exception.

Keep in mind that a trapper's most important attribute is Wilderness Survival, so one would normally run a 12+1+3 setup on it. The rest of the points should be placed in Expertise. With 12+3 Expertise, one should usually have enough energy that +energy equipment is not needed, unless using spells like (Arcane) Echo. The remaining 6 attribute points may be put in beast mastery for the sake of Viper's Nest, or any other attribute to improve secondary skills. One may also choose to take a rank off of expertise to put more points into beast mastery or another attribute.

A trapper should bring a high-energy set, such as:

The most powerful trap in the game (in raw damage), and causes blinding. It is considered a vital part of any trapper's repertoire.

This trap has high damage from causing burning. The trap lasts three seconds, so if it triggers early, it can still catch late foes.

This trap is the strongest trap snare in the game, as it, knocks down, cripples, and deals heavy damage.

This trap has both cripple and bleeding, and is the only trap that causes bleeding. 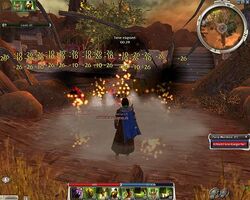 This trap is a good non-elite alternative to Spike Trap for a knockdown, if combined with Barbed Trap. If you're taking Spike Trap, consider not bringing Tripwire, since it doesn't do much damage on its own.

This inflicts poison, for extra degeneration after the burning wears off from Flame Trap. Good for finishing off survivors from the Degen or Obsidian teams.

Good for spike damage, even without Cracked Armor.

Both almost essential trapping skills. Quickens the recharge of your traps, allowing them to be used in quicker succession later in the game.

Useful against survivors, both because of damage mitigation and prevention of trap interupption.

This skill is useful for fighting survivors of all teams

These skills can help counter the degen team if you are having problems.

Very useful for countering the degen team, due to the large amount of regen it provides.

Essential to prevent the enemies resurrecting each other with their Resurrection Signets.

Make initial traps harder to survive, but each can be a mixed blessing later in the battle, especially EoE.

Combines with barbed trap to increase degeneration. good for eliminating survivors faster. Keep in mind that this affects your allies as well.

Allows poison to achieve greater degen. Keep in mind that the mixed "degen" team also has poison, so it may hurt you just as much as it hurts them.

Helps to stall the mixed degen and elementalist teams

Prevents Warriors from the degen team from triggering traps too early when they Sprint. Put this spirit as far forward as possible to affect them sooner, since they won't be targeting the spirit anyways. 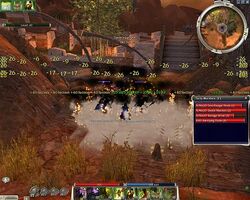 Trapping in the Zaishen Elite Mission.

When used with Dust Trap, it can greatly increase damage output. Always remember to use your stance first, then Arcane Echo, then Echo, then Dust Trap. Use the copied Echo to recopy Dust Trap. With Serpent's Quickness, you will be able to use six Dust Traps before the echos end.

You can borrow Spike Trap from a party member to plant up to two more Spike Traps.

Recover some energy if you run low.

This stance is very much like a non-elite alternative to Trapper's Focus, but it cannot be used alongside Trapper's speed or Serpent's quickness.

Because of their AoE interruption, excellent for countering the Obsidian Spike team, as they will all be casting Obsidian Flame simultaneously, and tend to ball up to maximize heal area's effects.

A useful heal against survivors. Note its elite status and attribute requirement.

Can recharge Serpent's Quickness for use against survivors, as long as you can knock them down. You must autoattack a bit to meet the adrenaline requirement though.

Free +50 Health as long as you don't attack.

Using these wells can be useful against the degen team.

Can be used to spike off survivors from the degen team.

Great if there are Piercing Traps in the party.

Increases knockdown time for stronger snares. Usually considered not necessary, as 2 seconds of KD and cripple is usually enough to keep enemies in the trapped area for long enough to die.

Useful to resurrect the party against the degen and Obsidian Spike teams in spite of Frozen Soil.

If you time this right, it will affect the foes right when they approach you. Otherwise, it also has other uses:

These and other similar skills can be used to help counter the degen team.

To reduce the cost of spells

Slows foes down even more than with just cripple.

If you have a weapon that deals fire damage, just auto attack.

Does not require investing points into Spear Mastery. Distracting Shot is better overall though, while this allows you to carry a shield.

Gives Dazed to a survivor. Best used on casters of the degen team or Elementalists. Note that this does not require a spear.